Uhud- A Mountain from the Mountains of Paradise 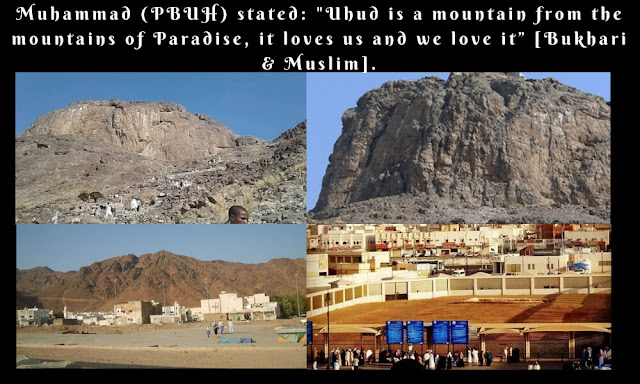 Mount Uhud is a famous mountain in Saudi Arabia which is located in the north of Madina. Uhud mountain consists of a group of mountains that enlarges from the east to the west with a length of “7” km. Its width is about 3km and it is at a distance of 5km from the Al-Nabvi Mosque.

A Hadith about Uhud Mountain is reported by Hazrat Ans (RA), in which Hazrat Muhammad (Peace Be Upon Him) stated:

“Uhud is a mountain that loves us & we love it.”

Most of Muslims visit this mountain in Madina when they perform Umrah because it is a Ziyarah Place which is included in their Umrah Packages all inclusive. When anyone visits this mountain then he/she will find many monuments on the mountain such as there are graves of seventy companions who are martyred in the Battle of Uhud. Sayyid Ash Shuhada Shrine is also located on the mountain of Uhud and it was a title of Hazrat Hamza (RA).

Another Hadith about Uhud Mountain which is mentioned in Hadith Books of Al-Bukhari, Abu Dawood, and Tirmidhi.

“Stand still Uhud, there is a prophet, an honest man and 2 martyrs.”

The force of Polytheists attacked the Muslims from behind due to archers descended from the Point of Uhud Mountain.

Due to a slight mistake, seventy Muslims were martyred in this battle. In this battle, Hazrat Muhammad (Peace Be Upon Him) lost his beloved uncle Hazrat Hamza (RA).

Mount Uhud was used in many examples:

The Prophet Muhammad (Peace Be Upon Him) stated about the legs of Ibn Masood (RA):
“By Him in whose Hand my soul is, they are heavier in the scale than Mount Uhud.”
(At-Tayaalisi)

The Messenger (PBUH) of Allah said:
“If you had an amount of gold equal to that of Mount Uhud and you spent it in the way of God, God would not accept it from you until you believe in fate.” (Ahmad)

“It would not please me to have an amount of gold equal to that of Mount Uhud and die while having 1 or 1/2 a dinar of it except for a creditor.” (Ad-Daarimi)

In order to show the reward of Funeral prayer, the Prophet Muhammad (Peace Be Upon Him) stated:
“The 1 who performs the Funeral Prayer will get a Qiraat, and the 1 who witnesses it until the dead is buried will get 2 Qiraats. By Him in whose Hands the soul of Muhammad (PBUH) is, the Qiraat is greater than this Uhud.” (Ibn Maajah).