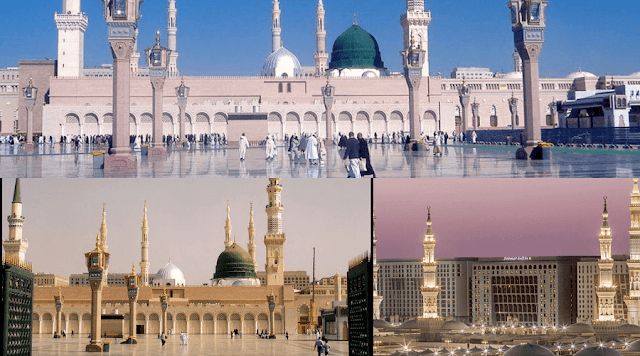 Many Muslims go to visit this mosque when they go to perform Umrah and Hajj. Umrah is a holy journey to the site of Kaaba and it can be performed at any time of the year. Most Muslims are performing Umrah with Umrah Packages 2020 all inclusive this year and they will visit different Ziyarah places in the packages. Al-Nabvi mosque is one of the various Ziyarah places.

Rather, he (PBUH) said every one to allow his Camel to go her own way for “she is guided by Allah” and his camel knelt on the place where Al-Nabvi Mosque is placed today, therefore, Prophet Muhammad (Peace Be Upon Him) decided to stay at the place and Al-Nabvi Mosque was built.

The initial condition of this mosque was so simple. Its the total area was just about 35 X 30 meters and the building of this mosque consisted of walls (date branches), pillars (tree trunks), and roof (straw).  The building of the mosque had 3 doors which names are Bab-al-Rahmah, Bab-al-Jibril, and Babal-Nisa and they were opened in direction of south, west, and east.

After the Gazwah Khaibar, the size and height of the mosque were increased to 50 X 50 meters and 3.5 meters respectively. After the time of Prophet Muhammad (Peace Be Upon Him), the dimensions of the mosque have been changed many times but the current situation of this mosque is; area= 90,000 square meters, height=1300 meters, long roof= 66,000 meters, and pillars=  2,000 more than.
The first time, the dome was constructed almost 650 years after Muhammad (Peace Be Upon Him)’s burial and it was painted in various colors including white and purple before being painted in the beautiful green we see it today.

In 1909, first place (Al-Nabvi Mosque) to be lit up when electricity was introduced to Arabian Peninsula whereas Sultan of Istanbul himself had full access to electricity after many years for his places. 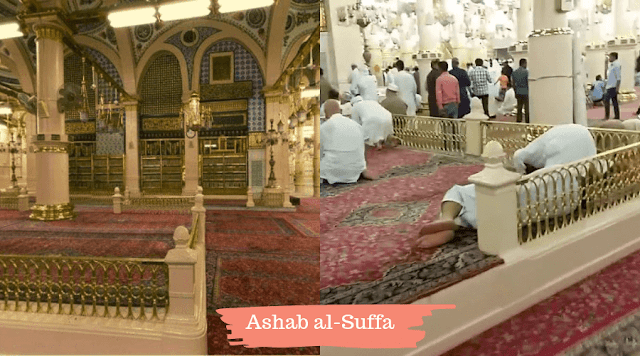 In Arabic, word Suffah means shed or porch, so term Ashab al-Suffa was given to those Companions who stayed in the shed next to the Al-Nabvi Mosque and devoted their lives for learning the Holy Quran and seeking knowledge from the Messenger of Allah (Peace Be Upon Him).

Most of the Hadiths are narrated by those people and some names of those companions are Abu Hurairah (RA), Abdullah ibn Masud (RA), Bara ibn Malik (RA), Bilal al-Habshi (RA), Talha ibn Ubaydullah (RA), and Abu Zar al-Gifari (RA).

This mosque worked as a center for preaching Islam. At that time of Prophet Muhammad (PBUH), people offered their prayers and got knowledge in this mosque and after gaining knowledge, people traveled to other countries for preaching.

In the one Hadith, Prophet Muhammad (Peace Be Upon Him) stated:

“Do not prepare yourself for a journey to any mosque (in term of prayers) but the 3 mosques al-Haram Mosque, al-Aqsa Mosque, and my Mosque”
(Bukhari: No. 1115)

In Another Hadith Muhammad (Peace Be Upon Him) said:

“One Prayer in my mosque is better than 1000 prayers in any other mosque excepting al-Haram Mosque”.
(Bukhari: No. 1116)

Nobody wants to miss the chance of getting the reward of 1000 prayers beside the one prayer, therefore, people should perform Umrah as soon as possible for them. They can perform the Umrah this year with the Cheap Umrah Packages 2020 all inclusive from anywhere in this world. 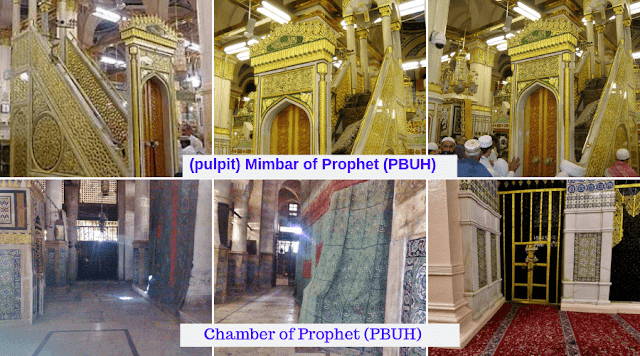 Mimbar of the Prophet Muhammad (Peace Be Upon Him) has a very important part in Islam because at this place Muhammad (PBUH) sat when they felt some tiredness during addresser.

In one Hadith, Hazrat Muhammad (Peace Be Upon Him) said:

“Anyone who comes to visit me and he came solely for this the purpose then It becomes Wajib upon me to do intercession for him on the Day of Judgment”.
(Tabrani)

On the eastern side of this place, there is the house of a daughter (Hazrat Fatima (RA)) of the Prophet Muhammad (Peace Be Upon Him).

Another great part of this mosque is Riyadh-ul-Jannah which is 22 m in length and 15 m in width, with some part of it situated chamber of Muhammad (Peace Be Upon Him).

Abu Hurairah (RA) reported that the Prophet Muhammad (Peace Be Upon Him) stated:

May Allah gives us a chance to visit the Al-Nabvi Mosque at least one time in life.