Who were 4 daughters of the Prophet (PBUH)? 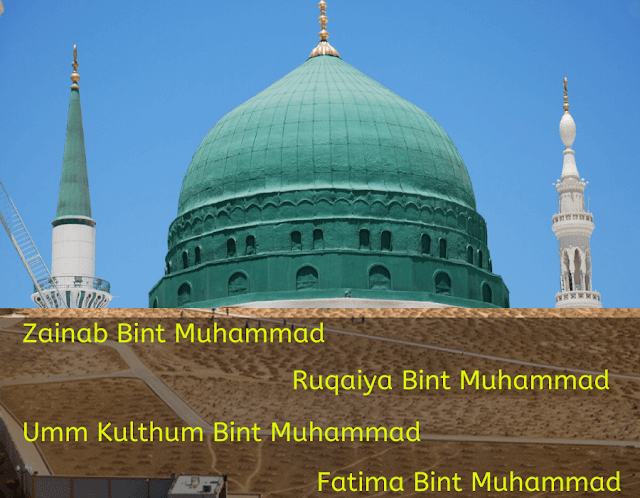 Prophet Muhammad (Peace Be Upon Him) was born around 570, AD in Makkah (Saudi Arabia). He was the first and only son of Abdullah Bin Al-Muttalib and Amina Bint Wahab. Abdulah (r.a) died before the birth of Muhammad (PBUH).

Halimah al-Sa'diyah (r.a) was the foster-mother and wet-nurse of the Prophet (PBUH). Your grandfather took care of your upbringing after passing Bibi Amina (r.a). But when you got the age of 8 years, then your grandfather also died, after that your uncle took up the responsibility of raising you. At the age of 25 years, Muhammad (PBUH) married Khadija (r.a).

6 children were born from Khadija (r.a), 2 of whom were sons and 4 daughters.

Fatima (r.a) was the youngest daughter of the Prophet (peace and blessings be upon him). You were married to your father's cousin - Ali ibn e Talib (r.a). You were the mother of two great martyrs of Islam, Hassan and Hussain.

She married to the cousin of Prophet Muhammad (PBUH)'Ali bin Abi Talib and was the mother of the great martyrs of Islam, Hassan and Hussnain. You had given birth to four children whose name were Hassan, Hussain, Zainab, Umm Kulthum. The main reason for the death of Bibi Fatima was separation from her father-Muhammad (Peace Be Upon Him), and almost every sect believe in it.

Prophet Muhammad (PBUH) stated: “Fatima is part of me, Whatever upsets her upsets me, and whatever harms her harms me.” (Muslims Shareef)

Bibi Fatima (r.a) died three months after the death of her father, Muhammad.

She was born three years after the birth of  Zainab (r.a) when Muhammad was 33 years old. She was married to the son of Abu Lahab, Utbah, who was Muhammad's uncle. It had not yet begun to stay with him when the Surah al Lahaab was revealed. Abu Lahab called his sons Utaibah and Utbah (who was married to another daughter- Ummah Kulsoom, of the Prophet of Islam, and said to them: "Unless you divorce both of Muhammad's daughters. I am not going to see your faces."

They divorced their wives. After this divorce, Hazrat Ruqaiya (r.a) married Hazrat Usman (r.a).
At the time of Badr, Hazrat Ruqaiya (r.a) was ill. Usman (r.a) was, therefore, asked by the Prophet Mohammad (PBUH)  to stay in Madina and look after her (daughter). The news about the victory in Battle of Badr was received in Madina when people were returning from Ruqaiya’s (r.a) funeral because she was died due to illness. The Prophet  (PBUH)  was, therefore, not present at her burial.

Hazrat Zainab was the eldest daughter of the Prophet Mohammad (PBUH) and was born in the 5th year of his first marriage. After the announcement of Prophethood, Hazrat Zainab bint Muhammad (r.a) soon accepted Islam and was cousin married to her cousin Abul Aas bin Rabi.

At the time of migration. Zainab (r.a) went to her father Prophet (PBUH) and asked him for permission to stay with her husband (Abul Aas bin Rabi). The Prophet (Peace Be Upon Him) replied, “Stay with your husband and children”.

She was 3rd daughter of the Prophet Mohammad (Peace Be Upon Him). She was married to Utaibah son of Abu Lahab, but her husband divorced her (r.a) after the revelation of Surah Al- Lahab.

After the death of Hazrat Ruqayia (r.a), Hazrat Umme Kulsum (r.a) was also married to Hazrat Uthman (r.a) in Rabi-ul-Awwal, 3 A.H. The Prophet Mohammad (SAW) said: “I have given Umme Kulsum in marriage to Uthman by command."

She died issueless in Shaaban (8th Islamic month), 9 A. H.

All daughters of Prophet were great defenders of Islam who was never left behind in the promotion of Islam. They sacrificed their lives and even children too only for religion. They were all great leaders to follow the path of life for women and are. Never anyone of us can take place of them. To visit these graves is only possible for you if you go to Saudi Arabia at any reason (Hajj, Umrah, Tourism, Business).

In 2020, it is a good chance for visit other historical places along with the graves of  Daughters of Prophet (Mothers of Muslims) by Umrah Packages 2021 All Inclusives because Saudi Arabia starts to issue tourist visas and people can perform Umrah on a tourist visa.